The ability to apply highly controlled electric fields within microfluidic devices is valuable as a basis for preparative and analytical processes. A challenge encountered in the context of such approaches in conductive media, including aqueous buffers, is the generation of electrolysis products at the electrode/liquid interface which can lead to contamination, perturb fluid flows and generally interfere with the measurement process.

Here, they address this challenge by designing a single layer microfluidic device architecture where the electric potential is applied outside and downstream of the microfluidic device while the field is propagated back to the chip via the use of a co-flowing highly conductive electrolyte solution that forms a stable interface at the separation region of the device. The co-flowing electrolyte ensures that all the generated electrolysis products, including Joule heat and gaseous products, are flowed away from the chip without coming into contact with the analytes while the single layer fabrication process where all the structures are defined lithographically allows producing the devices in a simple yet highly reproducible manner.

They demonstrate that by allowing stable and effective application of electric fields in excess of 100 V cm-1, the described platform provides the basis for rapid separation of heterogeneous mixtures of proteins and protein complexes directly in their native buffers as well as for the simultaneous quantification of their charge states. They illustrate this by probing the interactions in a mixture of an amyloid forming protein, amyloid-β, and a molecular chaperone, Brichos, known to inhibit the process of amyloid formation. The availability of a platform for applying stable electric fields and its compatibility with single-layer soft-lithography processes opens up the possibility of separating and analyzing a wide range of molecules on chip, including those with similar electrophoretic mobilities. 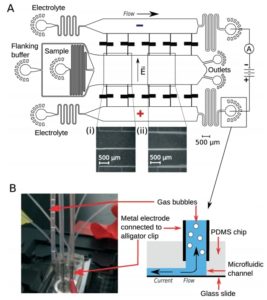 A full list of recent publications in which our technology has been applied can be accessed here.

Could this support your research?